There are lots of reasons for freelancers to take deposits:

One of the most common structures is to take a non-returnable 50% commencement deposit, followed by the remainder when the project is complete.

Two notes on this:

I used to charge along this basis, but there are a couple of downsides:

After experiencing both of these on more than one occasion, I switched to a three-part payment:

Your mileage may vary, but this had an immediate and significantly positive impact on my business.

There’s no real reason for clients to reject this structure. As I wrote previously:

It may seem scary, unjustifiable even, to hold 90% of the project fee when you’ve only completed 50% of the work. However, as the project progresses, that percentage of completed work is only increasing.

Assuming you have a contract in place, the biggest leap of faith for the client is the initial 50% deposit, which has already been paid. They’re now paying upfront for each stage of work.

It may not make sense to split payment for smaller projects (e.g. under £500) or those that will be completed in a short amount of time (e.g. one week).

In those cases, lots of freelancers charge the full fee upfront. The justification is the same as the non-returnable commencement deposit: you’re setting the time aside to work for them.

For freelancers working on an hourly basis, it’s common to charge in arrears (after the work is complete). That places most risk on the freelancer, but charging hourly doesn’t mean a deposit is out of the question.

For instance, it’s not uncommon to offer a range of hours for a project. In these cases, it might be reasonable to charge a percentage of this lower limit (e.g. 50%) as the deposit. 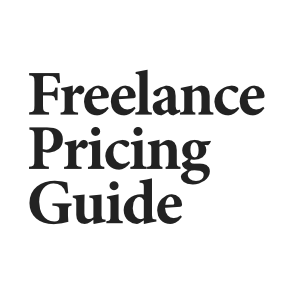 The Work Notes Freelance Pricing Guide has helped 400 freelancers set rates than work for them.